Mattes and Johanne Schippan had left their eldest daughter, 25 year old Mary looking after the other children while they traveled some 20km to visit relatives.  Around 8 p.m. the girls went to bed in the house while the boys slept about 90 metres away in a galvanised iron room attached to one of the farm sheds.  Their peace was shattered a couple of hours later when Mary felt something heavy lying across her.  Bertha's screams woke Mary who in turn woke the boys, sending them to seek help from a neighbour, who however, declined to assist.  They then had to rush 1km to the home of District Constable Lambert. Upon their return to the Schippan house, they found Bertha lying dead in a pool of blood with her throat slashed five times from ear to ear.

The Schippans were a close-knit, second generation, hard working immigrant family, staunchly Lutheran, whilst holding on to their German language and customs.  Their home was a simple log construction with a thatched roof.  Matthes Schippan, himself had a brush with the law after an altercation with some young men which resulted him him shooting one of them in the leg.  This incident in 1896 saw him stand trial in the Supreme Court, where he was acquitted.  Matthes was known to have a stern nature and was a strict disciplinarian to his children.
On learning of their youngest daughter's tragic death, the Schippans hurried back to their home whereupon Matthes formally identified Bertha's body.  A coroner's inquest established at the Schippan home, was adjourned until after the funeral.  When the inquest resumed, several witnesses were called, however none were able to shed any light on a possible perpetrator.

Dr Ramsey Smith, the City Coroner and head of the Department of Health, was called as a witness.  Hair appearing to have been pulled out by the roots was found in the house.  On examination of Bertha's recently exhumed body and also Mary's clothing, Dr Smith was unable to ascertain whether the blood found on the clothes and stockings of the older sister was human or sheep's blood.  Mary told the hearing she had assisted her father in butchering sheep a few days earlier. Constable Lambert said that as far as he could ascertain there had been no disturbance in the house, nor had there been any reports of strangers in the area that night.
Sensational evidence was presented when Mary admitted to having a relationship with Gustave Nitschke.  There was disappointment amongst the spectators when they were removed from the hearing to prevent them hearing full details. When 21 year old Nitschke was called to give evidence, he admitted the relationship had been going on for over 12 months.  This admission irrevocably tarnished Mary's reputation.  Mary denied threatening Bertha about the possibility of her infidelity being exposed to her disciplinarian father.  Stunned silence came over the courtroom when the coroner announced the result of the jury's deliberation 'Bertha Elizabeth Schippan met her death by having her throat cut by Mary Augusta Schippan'. 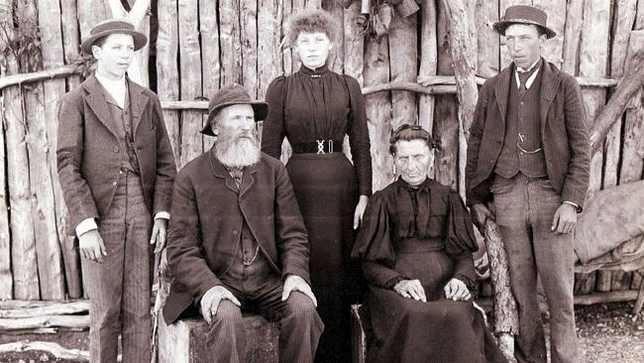 The Schippan Family - Mattes and Johanna Schippan with children Wilhelm, Mary and Gustav
After being formally charged with Bertha's murder, Mary was taken to the Adelaide Gaol to await trial.  Perhaps Mary was aware that almost 30 years earlier Elizabeth Woolcock was the first woman executed in South Australia and if the trial jury agreed with the coroner's jury, she could become the second.


Mary's fellow women prisoners were mostly thieves and prostitutes or alcoholics, the type of people with whom she had a little in common.  Her trial opened in March 1902 where she appeared before Chief Justice Sir Samuel Way.  Sir josiah Symon, a Senator in the first Australian parliament and latterly Attorney General, was her defence counsel.  Large crowds gathered at the Supreme Court hoping to gain access to the public gallery. Mary's plea was "not guilty".

Over the six days of the trial, crowds jostled to get a glimpse of Mary as she was taken between the court and the Adelaide Gaol.  Gustave Nitschke was portrayed as the villain of the peace by Josiah Symon and, as the trial progressed, public sympathy increased for Mary.  Nitschke was attacked by the crowd as he walked between the court and his lodgings, eventually necessitating a police escort.  The final day of the trial saw Mary accompanied to court by a female warder and the Keeper of the Gaol, Thomas Farrell.  The jury retired and in less than two hours returned with a verdict of "not guilty".  Mary appeared stunned as cheering broke out both inside the court and outside amongst the 3000 strong crowd as she left the court accompanied by her parents.  Gustave Nitschke was hurriedly escorted out through a rear entrance.


Mary returned to the farming community at Towitta, where she became reclusive and never married.  She died of tuberculosis in 1919.


The material for this story was extracted from The Trial of Mary Schippan by Peter Donovan, 2004, Donovan and Associates.
Other photos and material sourced  from Trove - National Library of Australia