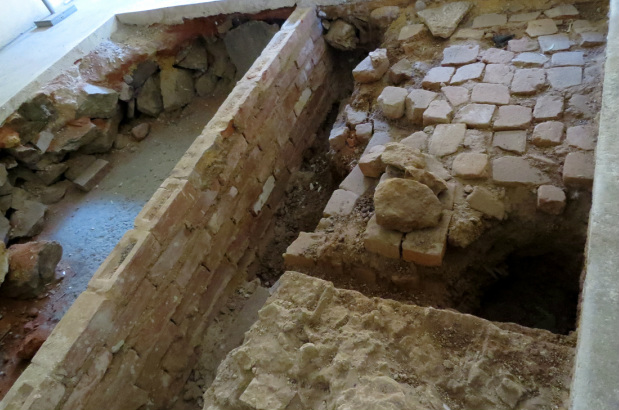 Recent archaeological investigations at the Adelaide Gaol have uncovered some intriguing finds.

So far the investigations have raised more questions than answers but have revealed some insight into the shared landscape of 1836 to 1949 on this portion of the River Torrens, including the sites of Buffalo and Coromandel Rows, where early settlers temporarily resided.

The construction of the female cell block placed a lid over the cultural landscape and sealed it for almost 160 years with only limited disturbance over that time. There is probably no other site on the River Torrens or anywhere in Adelaide that offers such potential for significantly raising our understanding of the early settlement of Adelaide.

The archaeology consists of found objects and features. The objects were retrieved from loose soil beneath the floor boards in the middle cell. They reflect the changes over time for this piece of land and for this building. They include ceramic and porcelain shards, bottle glass and window glass, animal bone, buttons, metal, iron, tools and cutlery, rings, oakum, sewing items and a child’s tooth fragment.

1.  The beginning of Indigenous occupation and up to 1836 (settlement begins).

Phase 2:
Early settlers arrive from Port Adelaide and camp in tents and mud huts with thatch roofs along the river while waiting for houses. They leave behind ceramic, glass, metal, animal bone, buttons, etc. (This relates to the surface beneath the floor).

Phase 3:
Gaol construction begins and this area is used as a works area whilst the earliest cell blocks are built. Bricks were fired here (feature with bricks laid out in pavement like fashion). 200 workers were employed by Borrow and Goodiar and they camped nearby. They left behind scraps of metal, iron, broken bricks, mortar, animal bone from meals, buttons, etc. scattered at the work site.

Phase 4:
The building is completed and the Gaol is now the shape it is today. The women occupy the original 6 cells and are given sewing and oakum picking activities. Needles, pins, thimbles, oakum, string, buttons, and other small objects, slip down between the floor boards. (This relates to the surface beneath the floor). By 1867 the new women’s cell block was ready and this building was used for work rooms and for a Matron. In 1867 a fireplace was put into the end room for Matron. Coke for use in this fireplace was stored beneath the floor in the cell opposite her room. The feature exposed at the end of the room outside of Matron’s room shows an old wall and on both sides of this was the coke. Some can still be seen. This wall is from an earlier building, probably built during construction works at the Gaol.

Phase 5:
The concrete slab and the air conditioner definitely belong to this phase. Objects include cutlery, tea bags and sugar sachets, but also the two features showing a concrete surface beneath the concrete floor. This was probably laid down in the 1920-30s for copper boilers. 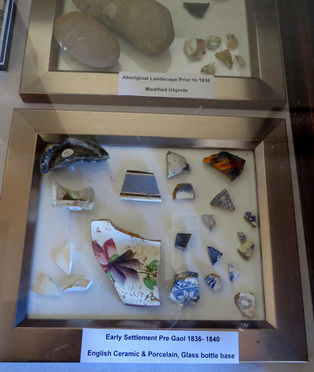 Objects such as the animal bone, rings, tooth and buttons could come from Phases 2-4. Objects from sewing are clearly Phase 4. The high quality ceramic and porcelain are clearly from Phase 3, reflecting the mix of social classes camping out along the River whilst waiting for houses.

As one of the volunteers was wandering through this building, he fell through rotting floorboards to another level below. Fortunately, he was unharmed but amazed at finding what seemed to be evidence of a prior building.

The archaeological investigations have revealed that this site was in fact the camp site or temporary home of some of the first European settlers to South Australia. They shared this area with the Kaurna people whilst they waited for more permanent accommodation.

It had long been suggested that the first settlers were camped somewhere along a stretch of the River Torrens quite near the Gaol and also that the first Gaol – a flimsy affair often referred to as the “Stone Jug” was located in this vicinity.

It now appears that the archaeological evidence supports the first supposition, but there is no firm evidence for the Stone Jug having stood on the same site.

The construction of the Adelaide Gaol in 1840-1841 placed a “lid” over these sites and sealed it almost undisturbed for 160 years. What has been revealed from the dig is similar to looking at a five tier layer cake and each layer represents a period of our history.