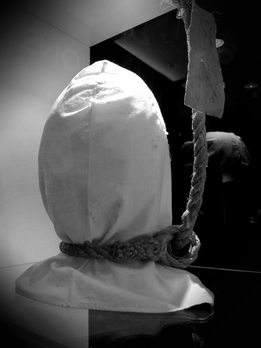 Hood and Hangman's Rope
Although there were 66 executions throughout South Australia, some of which were designed to 'impress the natives', the Old Adelaide Gaol holds pride of place for the majority of these.  Execution was by hanging - It was the ultimate sentence!

In the early days before 1861, the condemned were taken outside the Gaol and publicly hanged before the cheering crowd.  Contemplate for a moment, next time you drive up to the Gaol and park your car, you could easily be parked on the very spot where a convicted murderer met their end on the portable gallows.

The first public hanging to be conducted at the Gaol was Joseph Stagg in 1840 with a crowd of onlookers numbering approximately 700.  By the time the last public hanging was conducted there, William Bell in 1854, the crowds were said to have increased to a staggering 3000.

Bell would have been led through the main gate, just before 8.00 a.m., to be greeted by the sight of the gallows, draped with black cloth.  If the wind ruffled the drapes, Bell would have caught a glimpse of his own coffin waiting for him under the trap.
The hangman was colloquially known as 'Jack Ketch', after the hangman who in Stuart times, performed for the crowds at Tyburn in London. He prepared the condemned by imobilising his hands and feet.  The warrant was read and the prisoner asked if he had anything to say.  Last words were recorded and at the signal given by the senior official, the lever was pulled and the prisoner dropped into space, but unfortunately not to an instant and painless death as believed. Most victims died from slow strangulation even though their neck would be broken by what became known as 'The hangman's fracture' as the breaking of the neck was designed to render you unconcious, not to kill you quickly.

Reports of Bell's execution, in the press of the day, were very critical of the crowd in attendance and labelled them in the most derogatory terms.  Young children were hoisted up on shoulders, drunks too inebriated to move much at all, and many women turned up to make an occasion of the 'entertainment'.  It was after this time that the hangings were changed to a more private setting inside the Gaol.

There were 3 areas inside the Gaol where executions took place from 1861. The first was a corner next to the outside wall, now marked by a large sign bearing the numeral 5.  Thirteen executions took place in this location, the first being in 1861 four aboriginal men who were hanged on the same morning for their part in what was to become known as 'The Rainbird murders'.  The only lady to ever be executed in South Australia in 1873, Elizabeth Woolcock, also was hanged in this area.  The final hanging on a portable gallows, in the Adelaide Gaol, was Mah Poo in 1883.   After Mah Poo, there was to be an 11 year period where no hangings took place. 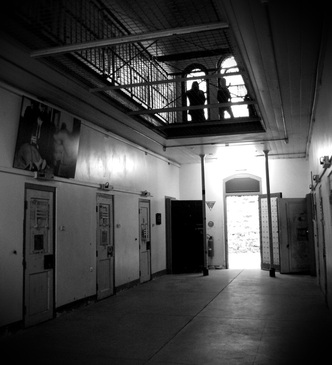 Gallows 2nd floor 'A' Wing, New Building
The gallows were soon to become a permanent fixture, no doubt largely due to the costs associated with erecting and dismantling of a portable gallows.  The New Building, built in 1879 was the next location to host these executions.

William Brown was to have the dubious honour of being the first to be hanged in 1894, on the newly erected permanent gallows.  His crime was the murder of his partner on a lonely gold field at Lovely Gully. Twenty more condemned murderers were to follow his drop, the last being Alfred C. Griffin in 1950 for killing his mistress.

The condemned prisoner would sit in the last cell to the right of the gallows, the 'condemned cell', while being watched by a warder all night. Just before 8 a.m. he was walked out to face the window, which in later years had shutters placed over it, before the executioner in the opposite cell pulled the lever sending the prisoner to his death.

All 21 names can be found listed in this area.

As the two guards towers became obsolete, due to their view becoming obscured, it was decided to move the permanent gallows to one of the guards towers where it soon earned the nickname - the Hanging Tower.  Although people visit the Hanging Tower with anticipation and often dread, in reality there were only four people hanged inside.  These were the last four prisoners ever to be executed in South Australia.  The first to be hanged on the new gallows was John Balaban in 1953 for murdering his wife, mother-in-law and stepson.  The last was Glen Valance on 24th Nov 1964.  After this hanging there were no more executions conducted in South Australia. 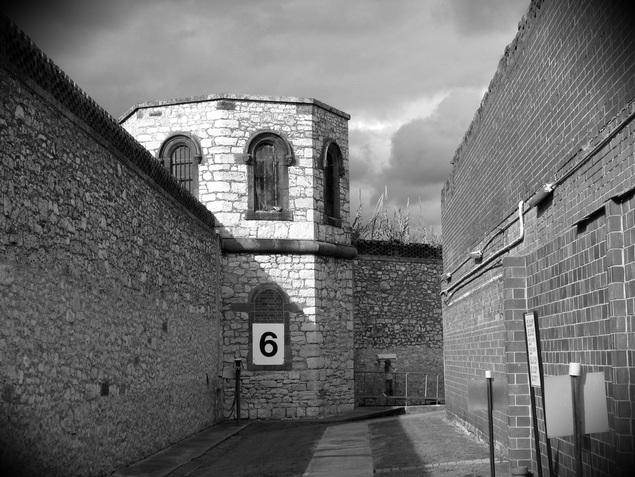 Hanging Tower
By English law and tradition, executed prisoner's corpses had to remain in the Gaol precinct and were not to be buried in consecrated ground.  The executed prisoner's body did not belong to his/her loved ones but to the State. To this end the bodies of all prisoners hanged at the Adelaide Gaol are still buried within the confines of the Gaol walls.  If you visit the Gaol, and take a wander past our cemetery, many of the burial sites are recorded with only a number signifying the order in history of the execution, the murderers initials, and the date of execution.

Of all the executions there was only 1 lady; Elizabeth Woolcock.  In her case the law was served but maybe justice wasn't.  Elizabeth's story and the 'life stories' of those others executed in the Adelaide Gaol, make a fascinating aspect to South Australian History.