Ghost Stories from People who Worked at the Gaol 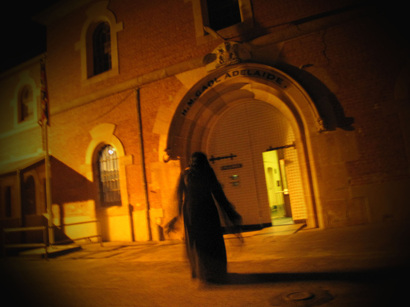 It is very common for people working on their own in the office in the Governors Quarters to hear footsteps upstairs.  The sound is thought to come from our very first Governor, William Baker Ashton, who lived and died upstairs.  One night Deanne, the Gaol's Manager for many years, was working back alone when she heard heavy footsteps walking around on the second floor above her.  She had heard them once before, but had put them down to an artist who had been renting a room above, so didn't investigate.  This time however, she knew the artist was not present.

It is worth noting at this point that even if somebody is walking around upstairs, the height of the ceilings and the thickness of the floor means that you would not actually hear anyone up there... not unless they were a large man.  Governor Ashton was said to weigh in at approximately 134 kgs.

This time, she was more curious about the footsteps because at the same time she heard them, her two dogs she had with her obviously heard them too.  Their hackles rose.  Finally, not being able to stand it any longer, they started growling and barking madly.  Deanne decided to venture up the stairs to see who was there and took the dogs with her to deal with any intruder.

The dogs raced up the stairs before her, still barking and growling.  As they came to the first door at the top of the stairs they started to impatiently paw and scratch at it.  Deanne pushed the door open and the dogs raced through into the room.  It was then that their behaviour took a strange turn. They started to leap in the air, their tails wagging as if happy to see whoever was there, before rolling over as if playing with somebody.

There was no-one upstairs... the room was totally empty!