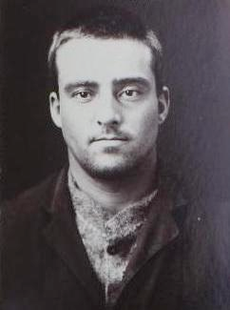 © State Records Authority of NSW
Ernest Ryan was born in South Australia in 1896.  He spent much of his adult life in various prisons around Australia, including the Adelaide Gaol.

In 1910, while being transferred from Adelaide to Gladstone Gaol, he managed to escape custody by jumping from the moving train through the toilet window while still handcuffed.  It was 13 months before he was recaptured when in unlawful possession of a bicycle.

At age 15 he received a whipping for larceny and was sentenced to be held at the reformatory until he was 18.  A week later he again escaped from custody.

In 1914 he was the first Australian criminal to use a motor vehicle as a getaway vehicle druing a payroll robbery in Sydney.  He sent the money to a friend in Melbourne for 'safe keeping' until he was able to collect it.  When he arrived in Melbourne, neither his 'friend' nor his money were anywhere to be found.
Ryan was 'good with his hands' and while in prison he repaired watches and toys, and kept the prison clocks running.  One of his exploits was to produce counterfeit florins which were then passed by a senior prison officer at a local hotel.

Although sometimes portrayed as a 'lovable rogue', Ryan was also a violent character.  He was a suspect in the 1909 murder of Constable William Hyde in Adelaide when Hyde was shot five times.  Police were never able to secure sufficient evidence to bring anyone to justice for the crime.


When disturbed while attempting to blow open a safe in Adelaide In 1929, Ryan was tackled by Constable Beaty.  Ryan hit the constable in the face with a piece of wood and fired at him at point blank range.  Constable Beaty's life was saved when the bullet hit his whistle in his breast pocket and deflected.  Ryan was then charged with the attempted murder of Constable Beaty while escaping arrest in Adelaide.


Ryan had many aliases. It was in Perth in 1932 when using the name Alexander Cleman that Ryan received a five year sentence for shooting at a man who had surprised him in the act of stealing petrol.

Ryan married Sydney sly grog queen, Kate Leigh in 1950.  Leigh had given Ryan a false alibi over the 1914 payroll heist. She was given five years in Sydney's Long Bay Jail for perjury while Ryan and his accomplice were each given 10. Although the pair had been corresponding for some years, the marriage was short lived.  Leigh returned to Sydney while Ryan stayed in Perth.  When Leigh was granted £3 maintenance, Ryan bemoaned the fact that he was only just surviving on an age pension of £3/7/6 a week.

He lived out the remainder of his life making battery whips for horse trainers until his death in 1957.  He is buried in Fremantle Cemetery.