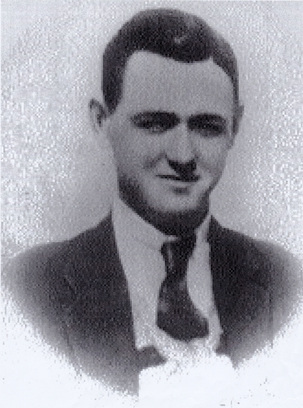 P.C. John McLellan Holman
On 23rd February 1927, a 23 year old plain-clothes Constable, John [Jack] Holman was about to finish his shift when a call was received concerning a disturbance at a house at Grenfell Street.

Unarmed, he drove in his private car with two other plainclothes constables to the address given.  On arriving, they looked around but found no evidence of a disturbance.  They did however, find a motorcycle and sidecar which was parked unattended in the street.  As it was a risk to other users, P.C. Holman decided to take it to Angas Street Police Station for safety reasons.  Another constable drove Holman’s car while Holman and P.C. Budgen started the motorcycle by pushing it.

Once started, suddenly 23 year old John McGrath, stepped out of the shadows and shouted at Holman to get off the motorcycle, “What are you doing with my motorcycle?”  Holman replied, “We are the police.” and stepped towards McGrath.  McGrath who was in possession of a revolver pulled the trigger and shot Holman in the lower abdomen before running off.  Jack Holman bravely gave chase after his assailant, along with P.C. Budgen, but only made it as far as the Grenfell Hotel (now known as the Griffins Head) before collapsing for good
.

Constable King who was patrolling nearby and witnessed the shooting took up the chase with Budgen.  P.C. Budgen reported that as he was chasing the suspect, McGrath turned and fired 2 shots at them.  Budgen heard 3 more shots from behind him and then saw McGrath fall to the ground.  Constable King had returned fire with two of the bullets hitting McGrath in the leg.

As Budgen approached, thinking it now safe to make the arrest, McGrath raised his gun and fired.  Fortunately, his gun jammed.  Budgen grabbed the gun before he could fire again and arrested him.

Grenfell Street, at Hindmarsh Square, where Constable Holman was shot dead. The empty cartridge case (on Right) shows where the shooting occurred while the cross by the car on left shows where Holman collapsed.
McGrath was arrested and on July 11th 1929 was sentenced to death for murder, as P.C. John Holman died shortly after from haemorrhage and shock.  However, on the 26th July, McGrath appealed the sentence claiming that he did not hear Holman say, “We are the police."  He added that the officers had been in plain clothes so again had no idea that they were the police.  McGrath was a wharf labourer at Port Adelaide and claimed that everybody there carried a gun for self protection.

McGrath had been suspected of firing shots at an earlier disturbance at George Skinner’s home & sly grog shop in Halifax Street and thought that Skinner was out to get him. Because of this, McGrath had believed the Officers were some of 'lofty's men' out to cause trouble.  McGrath went on to add that he deeply regretted the death of Jack Holman and sincerely sympathised with his relatives at their loss.

The case was reviewed and the reprieve granted, with the death sentence being commuted to life imprisonment with hard labour.  John McGrath was released from Gaol only 13 years later.

The Governor later presented both Constable Budgen and Foot Constable King with the King’s Police Medal in recognition of their bravery and devotion to duty.

John Holman had been living with his parents in Richmond at the time of the shooting and had only joined the force 2 years earlier in 1927. He had risen through the ranks quickly and just before Christmas in 1928 had joined the plainclothes branch. He had been popular with his fellow officers and his death devastated his family, which included his younger siblings who were very proud of him.

Sadly, John Holman was also to be married the following week.  His death left his fiance heartbroken.

Sources:
Notes by Trevor Peart
Newspapers and inquests from the day
National Library of Australia
Photos sourced from The Register News-Pictorial and other newspapers of the day